一年多以前 UltmateUltima said…
Hearing the calls as well, Katsune stood up. Her eyes narrowed as she slowly recognized the voice. "Obsidian, I won't let you touch my beloved... Only I may have the permission to play games with her, you see." Her hand started to glow purple as she grew cautious and defensive.

I keep punching the doors down, looking for an exit

Katsune walked out in the hall and saw Emerald there as well. "...R-Rae?!" It was clear, she felt unsure and powerless whenever she saw Emerald, and yet she urged to try and protect Rae. Tsk Tsk Tsk...

一年多以前 Lady_Rebel said…
(OMG, is that a picture of Leon?)

I held up three fingers and progressively put them back down. "One: death. Two: substitution. Three: Find a key. You're more than welcome to join our search for said key." I yawned and stuck another chip in my mouth.

(Heh heh heh, this is going to be fun. Lia and Lesk will both be there, but I'l be writing mostly fro Lia' PoV.)

I opened my eyes to find Lesk's gray ones inches from my face. "Lia! You ok?"

"I-I think so. Is this where Stara's trail lead us? I looked around. We were in a hall. "Dark place, but she wields darkness. But I prefer fire." I held up a ball of fire in my hand. "Let's go find her."

" I escaped Death once and I can do it again" I rub my hair back" I'll help in the search, I can sense the key when we're near it"

"Ah. Excellent. The maybe we'll get out of here." I paused, feeling something familiar both in front of me and behind me. "You don't happen to have a connection to water, do you? Or fire?" I frowned, trying to figure out out how the hell my sister and her over could be here.

We walked trough the hall, trying to figure out where we were and where my sister was.

" I have a connection to both, actually" I say" My dad is Poseidon and my mom's dad is Hephaestus"

一年多以前 Axel1313 said…
~Sisceal~
"Oh finaly!" I could see the sign from down the hall."Cleanliness is close to godliness!"

"Oh, you're from Earth. Lovely place. I met your dad and grandfather a couple of times. They don't like me much though. Gods and elves don't get along, plus I was kind of... pirating..." I changed the subject. "You know it's funny. My sister wields the element of fire and her boyfriend, for lac of a better word, wields water. I thought I just felt their presence. But I was probably imagining things, what you being connected with those elements and such."

一年多以前 Alvin2442 said…
I reach into my jacket, and pull out a small device. I put it on my ear and gritt my teeth.

I arched an eyebrow. "Why, when I have excellent senses and can use my element to send messages?"

" Well I have improved senses too, but I use it to keep contact with my friends" I take the device off and put it back in my jacket.

一年多以前 UltmateUltima said…
(If I ever try to get murdered or raped, I'll always ask the criminal...
"What's crackin'?"
--First. Thank you Rae, for that life lesson. See you on CNN.)

一年多以前 Lady_Rebel said…
(And on that note folks, I'm to bed, as it is 1:20 in the morning here and I don't feel like getting yelled at.)

~Sisceal~
Wrapping a towel around my waist I stepped out of the shower and to the mirror. Messing with my hair in the mirror.

一年多以前 UltmateUltima said…
(My time zone matches with Stara's! Well, of course I have to camp outside of her window to successfully stalk her... ^^ Well, I should get some sleep as well then. See you later~! ♥)

一年多以前 Alvin2442 said…
" Talk to you soon" I get up, walk around the halls looking for arestroom

一年多以前 Axel1313 said…
~Sisceal~
After putting my pants back on I continued to stare in the mirror.Examining my face."All this stress is makin me look so old lately."

I find a restroom, that's not occupied. I wash my face

一年多以前 Lady_Rebel said…
(So what, I leave and then everyone follows?)

After Alvin left I got up to investigate the source of the presence I felt earlier. The was no way that they were here. Just a trick of my imagination, you know, from the traces of water and fire from Alvin. But still, I had to look.

*Rae didn't really know what the hell was going on but it still made her feel quite edgy. What did these guys want with her, anyway? Was it because she's squishy and human? The weakest out of everybody? An easy target?
She frowned, realizing that all of this was indeed true.*

I see something and pick it up

Name: Lianna Amoran (aka Lethe Riveras)
Age: Roughly 18 or 19
Race: Elf
Personality/looks: Tall, black hair with natural bright red streaks, red and black wings, numerous scars, including: across her right eye, a scar from a cat o' nine tails on her left arm, and a scar wrapping around her right arm like a snake. She wields fire, has a fiery temper, and her hair and wings tend to burst into flame when she's angry or fighting something/someone. Fights mainly with swords, fire magic, and chakrams.

Name: Aleskander (Lesk) Cyfan (aka Skander Teeson)
Age: 19
Race: Elf
Personality/looks: Blond, grey eyes, tall, handsome. Also has wings (back and blue) and covered in scars including several in his face. (Think of Jason Grace from HoO, but with Percy's powers). He wields water and has a personality much like water. He fights with swords, water magic, and some sort of long range weapon which I have yet to figure out.

Background: I'm having this take place after my first book, which I'm still working on. Lia grew up as a warrior princess, much like her sister. When Claw betrayed them, sent Atlantis into civil war and Stara ran off ; Lesk lost his memory, she nearly lost her life trying to get it back, he regained his memory after partially healing her and sending her to Earth, where her memory was taken and his restored so that she could finish healing in relative safety as Lethe Riveras. Lesk stayed near her as Skander Teeson to protect her. Unfortunately, her best "friend" was an enemy spy and tried to steal her away to said enemy. Lesk intervened and took her to the good guy camp where she regained her memory and they won a few battles until Adrial disappeared and they went to look for Stara so she could help them find their little sister. And that's where they are now.

What they DON'T know is Adrial is actually the bad guy and Claw's her BF... She's one screwy girl. oh and she's looks like she's 17, but she's really much younger than her sisters, who only LOOK like thier ages, because they're immortal. 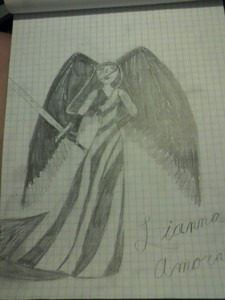 一年多以前 UltmateUltima said…
(Your story is more complicated than any riddle I could ever find. ^^~ Nice drawing!)

I dust off my jacket

Matthew's eyes flew open as he shot up from his sun-spot. Checking to make sure all his body parts were intact, he sighed in relief. He'd had that dream again. That dream where Cleo, (His master's daughter), found him and brought him back to that hellhole.
But... Would he be... Happier if Cleo found him?
He immediately regretted thinking that. Of course not! He was plenty happy here, with Rae and.. The others...
He lay back down, frowning slightly. Was he really happy here?
O-of course! Rae was the best thing that's happened to him in a while!
But.. Then there's Katsune who's out to kill him one minute and trying to be his friend the next. And the crazy, bloodthirsty host, Obsidian, and his vampire girlfriend.. And Stara-- Well, Stara wasn't really anything bad. She was just kinda mean to him. -3-
But... Well, he's safe!
Pfffft. No, he's not.
He's... Uh... H-happy?
Not too much anymore. More like confused and kinda scared.
But... But...!
Matt squeezed his eyes shut and held his head. The internal conflict was too much.
Sighing frustratedly and angrily wiping some bothersome tears that had perked up, he stood and stretched, then made his way back into the inn, ears pressed to his head, tail lashing from side to side angrily.

一年多以前 Lady_Rebel said…
(Still mad about the chips she snitched? The bag was empty anyways.)

I turned a corner and ran into them. "Oh, no. If you're here, then something even worse has happened."

"Stara! What the hell are you doing here? You need to come back to Atlantis! We need you!"

~Stara~
I turned away from her to hide the tears in my eyes. Last time I had seen them was before Claw betrayed me and Lesk had lost his memory. Now seeing them back together reminded me of what I no longer had. "No you don't. Atlantis is better without me. It's all my fault."

一年多以前 MOARdesu said…
(@izzah D'aww poor, poor Matt... ;-; The only person he really has is someone who is about to get her face rearranged by the main antagonists...what a shame...)

一年多以前 UltmateUltima said…
(I lol'ed at 'Atlantis'. xD No offence, though~!)

I kick a door down and sensing things

一年多以前 YugiohFanatic1 said…
Emerald kept walking down the halls."Come on out~! It's time to play~!"

I take off running

一年多以前 MOARdesu said…
*Oh, great. Now they're coaxing her to go out and 'play' with them.
If anything, the 'game' would be very much like the one Katsune almost killed her with. Only this time, she might actually die. Besides, the only reason she even survived the demon's constant game is because said demon had a major soft-spot for her, and always backed out some time or another.
But Obsidian and Emerald? They couldn't give any less of a damn about her. To them, she was like a toy to mess around with to the breaking point, which was probably why Obsidian refered to her as one of his 'dolls'.
Rae bit her lip, and scampered down the hall in the opposite direction.* 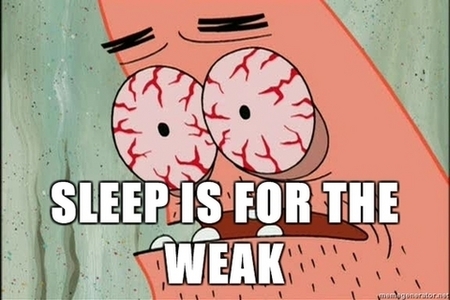 I kick a door and knocssomething down, falling to the ground

一年多以前 Lady_Rebel said…
(I'm going to assume that Rae is "scampering down the hallway towards my little group, kay?)

"Stara, it's Claw's fault. He-" I broke off as I heard someone running down the hall towards us. I whipped out my hand-and-a-half sword and crouched, ready to spring.

一年多以前 MOARdesu said…
*Rae turned the corner towards them, looking back to see if Obsidian and his little girlfriend were following on her trail. She let out a surprised gasp as she seen Lia crouching over as if about to attack*
"Woah, woah!" *Backing off with arms raised defensively, Rae looked up at Stara* "Is this a bad time...?"

一年多以前 Alvin2442 said…
I get up and slammed into something, and fell back to the ground

"Stand down, Lia! That's Rae. She's quite literally harmless." I glared at my sister to make sure she had lowered her sword before turning to Rae. "This is Lianna Amoran, my sister. And this is Lesk, her boyfriend."

Rae is like a really stupid deer...just prancing right into danger...)

"Wow, really?" *Rae grinned, forgetting all about the fact that she was being hunted down by the two main antagonists.* "That's cool. I'm Rae...but Stara already told you that so..."
Previous
Something to say? Sign in with one of these options:
Log in to Fanpop! Not yet registered? Create a new Fanpop account!