Katsune opens the door and then enters, dragging Rae along with her. Using her foot, she kicks the door closed. Katsune then lays down on the bed and turns the TV on..."Hey Rae, sit down, my favorite movie is on." She smiles at Rae and continues to watch her 'movie'.

(*Loves to troll Rae when she's supposed to be studying*)

一年多以前 MOARdesu said…
(It's summer break. Why you be studying? :U)

一年多以前 UltmateUltima said…
(When you learn a language that makes you sound like a dying frog because your parents say so.)

Katsune clicks the TV off and frowns. "I missed it". "...We can always continue what we were going to do..." Katsune stood up and puts her hand on Rae's shoulder and smiles. "Do you remember what I planned?"

一年多以前 UltmateUltima said…
"Well....That was quite blunt..." Katsune was bored. "I'm bored. So I'll do my favorite thing to do when I'm bored." She picked up a knife from the table and grabbed Rae's wrist firmly. She held the knife against it and waited for it to seep in itself.

*Rae cries out, though a little less surprised than before.* "Y-you really like doing this kind of shit don't y-" *She yelps again as the knife breaks through the skin* "Ow, dammit!"

一年多以前 YugiohFanatic1 said…
((i finally have a keyboard so i can role play once more!))

一年多以前 UltmateUltima said…
Katsune's eyes soften. "Aw, I'm resisting the urge to taste that beautiful blood of yours..." Katsune quickly slides the sword to the left and it disappears. She holds Rae against her from behind and whispers in her ear, "Thank you for this day with me, but I'm afraid your FRIEND Matt, will die anyway..." She grins and disappears. What will happen to Matt now? Where is Katsune going? Is Rae going to get trolled again? Find out next time on....HOTEL CALIFORNIA! :D

一年多以前 UltmateUltima said…
(Yep, I remember dem days when I laughed while lying down. Agh, dem sides were tighter than dem demi's. Yep. )

一年多以前 MOARdesu said…
*Another horrible trick? Is Katsune just messing around again?
Oh, man. What if she isn't? Then what?*

Katsune walks around the library, searching for Matt. Secretly, she has a poisonous knife in her pocket. Out of frustration, she calls out, "Matthew, dear! I have to talk to you! Don't worry, I have to spare you for the sake of Rae, so come out, come out, wherever you are!"

一年多以前 MOARdesu said…
"--UUUUUUUUUU--!!"
*Still yelling, she races out from the room and into the hallway, wielding the steel bat from way earlier that MOARdesu totally forgot about until now.*

一年多以前 UltmateUltima said…
Katsune stops her search and turns around. "...Rae? What the..." She sees a lady running down the hall with a bat and she's screaming too.. i.e Rae. Katsune decides this wasn't the best time and so she ran down the hall hoping Rae wasn't after her. "Rae dear! What are you d-doing?!!?" Katsune calls out to her, and even if she had all those powers and what-not, she couldn't hurt her dearie!

一年多以前 UltmateUltima said…
"Nnh!" Katsune, tense, takes a quick left. "OK, we can talk it out! OK? Is that OK? J-Just be a nice girl and put the bat down!" As she tenses, she tries to run faster, but obviously that'll make her tired right? Either way, she's screwed, huh?

一年多以前 MOARdesu said…
"--UUUuuUuUu--!!"
*She swings, the bat misses by a just a few inches. The sharp turn throws her off a little, but she's still hot on Katsune's heels*

一年多以前 UltmateUltima said…
"Rae, my wife, don't get angry at me on our first day of marriage. Please." Katsune tries to use her abilities to run fast, like she did when she was racing Stara, but as much as she tried to do that, or as much purple hue seeped out of her eyeballs, Rae was right behind her. Sure, she loved having her behind her, wanting to be near her, but with a baseball bat? ... Katsune turned around and managed to get the best of Rae. She held her from behind firmly.

一年多以前 MOARdesu said…
"--ck!!"
*Rae gasps as Katsune latches onto her, though she still holds the bat tightly in her hands*

一年多以前 UltmateUltima said…
Being naive, Katsune leans her head out next to hers, letting her be easy to hit.

一年多以前 MOARdesu said…
"..."
*A rush of anger hits her and clouds her mind. It would be payback. Yes, payback for hurting her and Matt, goddammit!
She grits her teeth and yells, swinging the bat. Though it does hit Katsune, it's not very powerful. Rae's position was too awkward for an effectively strong blow.*

一年多以前 UltmateUltima said…
Katsune lets go of Rae and holds her forehead. "...What was that? You insolent..." Katsune's sword appears in her hand and apparently Katsune is all yandere again. Boo-hoo... She points it at Rae and grins. "Swing it again, 'dear'"

一年多以前 MOARdesu said…
"Happy to."
*She swings at her again, this time giving a more meaningful hit to the gut.*

一年多以前 UltmateUltima said…
Katsune's (copyright Starayana Amoran corp., all rights reserved.) wings lash out and deflect it. Due to the damage her wings have to retract for 5 minutes. (Updates coming soon!) Katsune slashes at Rae's chest, but lightly, she doesn't want to be a widow.

一年多以前 MOARdesu said…
*Rae cries out in pain, mostly towards her shirt being slashed up once again. She looks up from the damage to glare intensely at Katsune. This was the last time anyone fucks with the shirt!
Raising the bat again, she takes another shot.*

一年多以前 UltmateUltima said…
(xD I don't get if Rae is supposed to be girly or tomboyish.)

Katsune parrys the bat, although she can feel Rae's "anger" over her shirt.

Katsune side-steps and replies to Rae's silly claim. "Why on earth would I do that, dearie?"

"Hnngh!"
*Rae thrusts the end of the bat into Katsune's stomach*

Katsune is caught off guard, and the blow hurts her badly. "..Agh.." Her vision blurs, and her eyes start to fog, could this be Katsune's weak spot? Is this the end for the devil/yandere/rapist/murderer of Hotel New Jersey? What will Rae do? Is Matt homophobic? Find out next time on.. HOTEL CALIFORNIA!!!!

(I have to go. See you next episode!)

一年多以前 izzah25 said…
((xD I don't think Matt is homophobic; he just doesn't like Katsune.
And it seems nobody else does, either.))

((@aNinnyMouse
WELL.
Matt and Rae went around to explore after the party.
Rae fell down a well.
She found a skeleton that scared the crap out of her.
She nearly went crazy down there until Stara(...? I think...) Saved her.
Katsune started to hurt Rae.
Katsune almost slit Matt's throat.
Katsune and Rae got "married."
Katsune is crazy jealous of Rae and Matt's relationship, though it is no more than a brother/sister one.
Katsune tried on multiple occasions to kill Matt.
The above was one of those occasions.
Rae went a bit bat-crazy and started swinging her steel bat around to stop Katsune from killing Matt.
Then they had an epic battle.
Rae finally hit Katsune weak spot. Sorta. Kinda. Maybe.
MEANWHILE~
Obsidian and Emerald had been having relationship problems as well.
Emerald got jealous when Obsidian was joking around and kissed Sisceal.
Emerald was heartbroken. :(
Cue the cliché scene of Obsidian running after Emerald and apologizing.
Emerald was not nice to Obsidian.
And that's all I remember on their side~
:D I hope this helped.
You can always go back and read up until here.))

一年多以前 aNinnyMouse said…
((OH MY GAWD! WHY ISN'T THIS A SHOW/BOOK/WEBCOMIC/ANIME/MANGA ALREADY?? I AM FUCKING REJOINING!!))

一年多以前 Lady_Rebel said…
(And Stara has been here there and everywhere, saving people's butt's and then kicking bad guy butt in a fistfight! Booyah. And it was Katsune who rescued Rae.)

"Don't I know it. Death is the only certainty in life, even if you are immortal (*coughcoughLIKE0ELVEScoughcough) I just want her mentally scarred by war."

一年多以前 MOARdesu said…
(@izzah ;-; I like Matt...
@Ninny OMFG A MANGA OR WHATEVER OF THIS SHIT WOULD BE SO FUCKING SWEET! :UUUU)

一年多以前 aNinnyMouse said…
((IT WOULD! SOMEONE GET US AN ARTIST!))
name: Jack Riggs
age: P.Y.T
personality: Sly, persausive, flirtatious, vain, and quick on his feet.
background:Once a very handsome young and successful conartist and an aspiring musician, Jack Riggs was descended from a corrupted judge who was allegedly cursed for hanging an inoccent 16-year-old girl during the salem witch trials. He had his name changed legally but he could never escape his bad blood.


His father was once a catholic priest who "accidentally" impreganated a young church-goer on Christmas Eve. But Jack himself never was one for religion until the day he sold his body to the devil. He wanted what everyone else wanted; Fame, fortune, and above all else love. With love, he'd finally get a place in life.

For years he did the devil's dirty work. He went from house to collecting souls from the corrupt and wealthy. He killed the people who tried to escape all while being chased by love struck women and climbing a ladder towards wealth with his music. It was all going swell until the Devil came to collect.

He had to ditch his one and only. Break her heart. He had to fake his death and keep in hiding but no one could hide from the devil. They found him, captured him and dragged him down screaming. 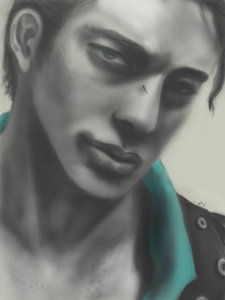 一年多以前 MOARdesu said…
(Fuck, I know! HIS DRAWINGS ARE TEH BOMB! :UU)

一年多以前 aNinnyMouse said…
((YAAAY thanks! I just don't know how to make an entrance with this guy))

一年多以前 MOARdesu said…
(I dunno, make him fall from the sky? xD)

Katsune held her stomach and looked up at Rae. "...I'll return my dear, and that too, with Matthew's head.." She disappeared and I hope for her to reappear wherever the heck Matt is right now..