130
talk to justin online
posted by lilrina
if 你 like justin bieber then this is the 文章 for you1this is a website well justin own website he owns it the website is www.justindrewbieber.com go make 你 account now and talk to justin now steps
1.go to genrally justin 2.go to for my 粉丝 to chat with justin and 你 are on ur own.also kylie jenner from keeping up with the kardashian sometimes goes on u also can give gifts to justin and leave him messages in his 收件箱 你 dont need to read this part its just becuz i have to make this longer 爱情 你 all my 茉莉, 茉莉花 v 粉丝 and justin drew bieber deos not have a 潮流粉丝俱乐部 his old 个人资料 was kidrauhl so justin_prvt is not real k ppl he deos not have one he delted his account.im sure justin will enjoty all of 你 coming on to talk to him and maybe 你 can share a song 你 wrote for him 或者 help him right a song it may appear on one of his new albums
4
Justin Bieber Opens Up About His Parents' Divorce
posted by MarylovesSelena

Like a lot of teens, Justin Bieber's parents 分裂, 拆分 up. Although he spends the majority of his time on the road with his mom Pattie, Justin's still pretty tight with his dad Jeremy, who JB credits for teaching him how to drive and introducing him to classic rock.
"I have a great relationship with my dad," Biebs tells Seventeen magazine in a special issue devoted entirely to the Canadian pop star. "When I was younger, he taught me how to play some songs on the guitar, like 'Knockin' on Heaven's Door' 由 Bob Dylan." Justin's able to remain so close to both his mom and dad because they respect each...
continue reading...
1
Jazmyn Bieber
posted by JustinBILoveU
Do 你 likw Justin's little sister Jazmyn? Then 加入 her 潮流粉丝俱乐部 ------> link Shes realllyy cute and realllyy sweet. Ever seen her 视频 on youtube?(: They are 发布 at the fanpop! Make sure to be a 粉丝 and tell a lot of other people about her! She is sooooooooooooooooooooooooooooooooooooooooooooooooooooooooooooooooooooooooooooooooooooooooooooooooooooooooooooooooooooooooooooooooooo cute and deserves all the love! It is also ran 由 rbruz! Lordrauhl from youtobe checked it out! ok, so, yeahhh!!!!!!!!!!(: Do 你 like jazmyn? leave me a comment!
He finds out you’re starving and cutting yourself {one-shot}
posted by MJ_Fan_4Life007
你 sit beside Justin on the couch, laptop on your lap while 你 scroll through your timeline on Twitter. Not finding anything interesting, 你 switch over to going through your mentions. A smile finds its way to your lips as 你 read through the tweets at the top, all of them flattering compliments. Your smile instantly turns into a frown however when 你 continue to read and find aq lot of rather hateful messages. 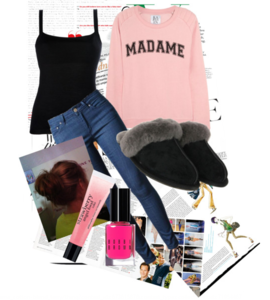 your outfit
warning: Nothing, left the sexual stuff to be up to your imagination.

You cuddle closer to Justin on the couch, the sounds of The Last Song playing in the background. Justin finally has a 日 off and the two of 你 have just been relaxing all day. Justin nuzzles his nose in your hair.

“Mm. I 爱情 you, do 你 know that?” He hums, pressing his lips to your forehead. He puckers them up and traces them along your hairline, down your cheek until he finally reaches your lips. “I really 爱情 you.”

His words only come out as a whisper against your own lips before he kisses you. The 吻乐队（Kiss） starts...
continue reading...
5
Justin Bieber All grown up!
posted by TotallyHannah 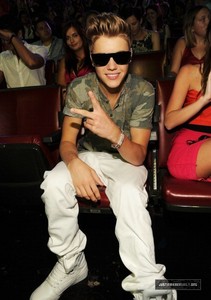 Justin at the teen choice awards
The world’s most famous teenager only has a couple of years left before that 标题 gets passed on to someone else. With his third album Believe, Justin Bieber wants to portray maturity. After the reviews came in, it seems critics are comparing Believe on Beiber’s career graph to another pop 星, 星级 namesake, Justin Timberlake.

In an 电子邮箱 interview, Bieber repeats that his new album is not just for his dedicated 粉丝 base of ‘beliebers.’ “I just wanted to portray a little bit 更多 maturity in my music. I think that in addition to my young fans, the 音乐 in this album is something that...
continue reading...
5
Justin Bieber Presents $100,000 to Whitney Elementary!
posted by maritina12345 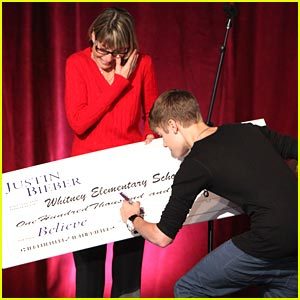 The 17-year-old musician surprised Principal Sherrie Gahn and the students of Whitney Elementary in Las Vegas earlier this 年 when he announced he would perform a holiday 音乐会 in December.

Justin kept his promise and performed a very special holiday 音乐会 for the students. He also presented Principal Sherri with a $100,000 check for the school and delivered $100,000 in toys from The Ellen DeGeneres Show.


Read more: link
2
when i saw my first jb video
posted by loveme2011
when i saw my first jb video i was with my mom and i was so bored that i could work on my school but i did not but mom 说 go ahead and go to the compter so i did and type justin bieber but i was just playing around but i really wanted to listen to jonas brothers but when i clicked justin bieber the video one time and at first i thought he was ok but when i saw the video baby i fell in 爱情 with him and i was collecting posters and cd's and shirts.but when i saw his pic i 说 man his hott. but my brothers 说 he is gay but every time they say that now they get hurt 由 me punching them hard...
continue reading...
6
Justin Bieber ~ Heartache Lyrics
posted by tabithasb13 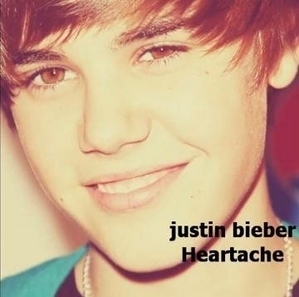 But yesterday we were
I don’t understand?

And I thought it would last the rest of our lives
Boy was I in for a big surprise,
With no doubt looking round
Thinking that I'm so cool

Same place, same time
Every 日 of my life
Could we meet after school?
Finally if I didn't make her cry
She wouldn't be with another guy

Nothing can cure my headache
Cause I'm experiencing
What they call heartbreak
It's going to hurt worse
As long as I stay here
I know but man just let me lay here.

Cause this is something that I can't...
continue reading...
4
OMG I SAW MILEY AND JUSTIN KISSSING
posted by hottiel10
I JUST SAW MILEY CYRUS AND JUSTIN BIEBER 接吻 AT A 5 星, 星级 RESTRANT.I FOLOWED THEM AND GOT A PIC THATS ALMOST DONE BUT THEN THEY ALMOST SPOTTD ME THEN THEY WENT TO JUSTIN'S HOTEL AND THEN THEY WATCHED A MOVIE TOGETHER THEN BAM! THEY KISSED .I WAS WATCHING THEM 吻乐队（Kiss） FOR LIKE 3 MIN.IT WAS CRAZY!!!!!!!!!!!!!!!!!!!!!!!!!!!! I COULDNT BELIVE IT!!!!!!!! IT WAS SO WEIRD SEEING THEM 吻乐队（Kiss） THEN FOR SOME RESON GUESS WHO CAME THROUGH THE DOOR IN SHOCK DURING THE 3 MIN OF KISSING.IF U GUESSED JUSTIN EX GF TRYING TO GET HIM BACK THEN U WAS CORRECT.SHE WAS YELLING AT HIM I WAS LIKE OMG THEN JUSTION SAID...
continue reading...
You Might Also Like... 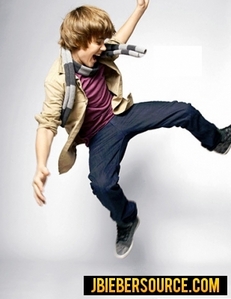 The 秒 season of "Glee" already has 粉丝 buzzing about some exciting new musical possibilities. After initially declining an offer from "Glee" producers, 酷玩乐队 has finally come around to the idea of being featured on the show. “Coldplay and Bryan Adams were really the only rejections. But 酷玩乐队 called a week 以前 and said, ‘We’re sorry, 你 can have our catalog,’ ” Glee‘s creator, Ryan Murphy, tells the Hollywood Reporter. With 最佳, 返回页首 selling albums like "X & Y," "Parachutes" and "Viva La Vida," producers will have a wide range of musical possibilities to choose from....
continue reading...
5
Justin Biebers parents fight over him
posted by keninv

Justin Bieber 说 the other 日 that he is a bit depressed right now because of the problems he is having with his parents.

星, 星级 Magazine reported that Justin had a hard childhood because of custody battles between his parents. In 1995, when Justin was only 1-year-old, Pattie Mallette, Justin's mother, got custody of him.

But the battle over him goes on, according to what Justin 说 a couple days ago.

Lucky for him, these family issues are not interfering with his career. He is getting better and 更多 流行的 every day, just check him out performing in Wembley Stadium in front of 70,000 people.

What success! OK, OK, people didn't just come to see Justin, they also came to see 蕾哈娜 and 凯莎 and many other singers perform. Justin must have been really excited.
4
BoyfrienD .. In my own lyrics duetto with Justin Bieber
posted by BelieberHyunner
- Eppie & Justin Bieber

[Pre-Chorus]
"I like JB... He's everything I want...
Haters... Go to freakin' he'll..."
[Chorus1]
If you were my BOYFRIEND...
I'd never let you...
I'd hug you all...
continue reading...
1
justin bieber facts
posted by kerryanne189
Justin Drew Bieber is a Canadian singer and songwriter. After a talent manager discovered him through his YouTube 视频 covering songs in 2007 and signed to RBMG, Bieber released his debut EP, My World, in late 2009. It was certified platinum in the U.S. He becaJustin Bieber, pop prince, and Selena Gomez, pop princess, thrilled 粉丝 for years when they reigned as the perfect couple. And even after they broke up, hints that they would reunite excited their followers. But now, following a brutal battle on Instagram, they seem to have gone separate ways. The latest reports reveal that even as Justin focuses on his new gal pal Sofia Richie, Selena still has serious feelings about her former boyfriend. from kerryanne189
5
Me and Justin Bieber (fan fiction story)
posted by Swagger6433
Me:I can't wait to see Justin Bieber
Justin Bieber:*Stands 下一个 to me* Oh do 你 mean me?
Me:OMB!!Hi Justin Bieber...I didn't see 你 there :D
Justin:So are 你 here to see me during one of my shows?
Me:Yes I am.I'm really happy and excited to see 你 :D
Justin:Aww thanks!!I really appreciate all your support :)
Me:I 爱情 你 Justin and all your songs.
Justin-Thanks again :)
Me:You're welcome
Justin:By the way what's your name?
Me:Ariella
Justin:Well Ariella it was nice seeing you.I have to go and get on stage.I'll see 你 soon.Bye
Me:Bye Justin. :)
(A 分钟 later)
Justin:*Sings Boyfriend*
Me:*Holds up a sign that says Justin Bieber Is Cute*
(3 mintutes later)
Justin:*Finishes the song then leaves the stage*
Me:*Sees Justin* Justin 你 did great!!!
Justin:Thanks..girlfriend ;)
Me:What??!!
Justin:Do 你 wanna be my girlfriend??
Me:YES!!!!!!! :D
The End.
2
Somebody To 爱情
posted by ImUnbroken
"Somebody To Love"


For 你 I'd write a symphony,
I'd tell the violin,
It's time to sink 或者 swim,
Watch them play for ya,
For 你 I'd be, (whoa oh)
Running a thousand miles,
Just to get to where 你 are. 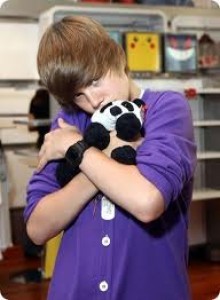 All Justin 粉丝 think he is super sweet, but do 你 know why that is?

Before going on stage, Justin hangs out with his teddy bears and eats candy. Remember that 糖果 gives people a boost of energy form the sugar, and this is maybe why Justin eats them, to keep him going through the show! We just hope his teeth aren't taking the toll for his sweet tooth. It would be too bad if he was toothless at the end of all this!

Right now Justin is on tour in the USA, and it is not easy to put on a Justin Concert. Nothing less than 11 buses filled with people, equipment, and all the necessary gear for putting on a JB show!
More Cards
1234567891011