1. Witch
The villain does his best to give his worst, and Walt 迪士尼 Productions are no exception. Good cannot triumph without evil. In 479 animated 动画片 and features, they have brought to life some rogues who will go down in history. On the following pages, we pay tribute to some famous characters who did not win, however hard they tried.

1. Witch-Walt Disney's most famous and terrifying witch made her debut in "Snow White and the Seven Dwarfs" in 1937, the academy award winning story about the 皇后乐队 who turns into a witch and offers her stepdaughter a poisoned 苹果 because she is jealous of her youth and beauty. The witch eventually fails, of course, but not until she's 给 the Seven Dwarfs and children all over the world a healthy scare 或者 two.

2. Cinderella's Stepmother-Best remembered for her cruel treatment of her stepdaughter and her piercing stare, Cinderella's stepmother was outwitted in the end, thanks to the help of two dedicated mice and a fairy godmother. Like many of Disney's feature cartoon villains, her debut as a performer so associated her with the cartoon she first appeared in that she was never asked to perform again.

3. Captain Hook-A very well-known 迪士尼 villain indeed, Captain Hook was leader of the pirates of Never Land in "Peter Pan" in 1953, and posed a constant threat to the hero. What made this cartoon feature unusual, though, was that the villain had a villain: a hungry crocodile. In the end, Hook 迷失 the battle on both fronts, which certainly places him high up on the 列表 of all-time losers.

4. 皇后乐队 of Hearts-The lady above would certainly never win any prizes in a beauty contest! The 皇后乐队 of Hearts from "Alice in Wonderland" in 1951, she did her best to scare Alice silly. Although most villains are remembered for thier characters and personalities (or the lack of them!), the 皇后乐队 is probably best remembered for her line "Off with her head!" It was a wasted command, though, since Alice awoke from her dream before it could be carried out.

5. Maleficent-Of all the villains Walt 迪士尼 created after the witch in "Snow White and the Seven Dwarfs", none is as sinister 或者 as powerful as the wicked witch Maleficent. So awesome were her powers in the 1959 release "Sleeping Beauty" that she was able to turn herself into a monstrous, fire-eating dragon to try to prevent Prince Phillip from reaching the beautiful Princess Aurora. But her powers proved to be no match for the virtue and sword of the Prince.

6. Cruella De Ville-What most villains do for money, power 或者 revenge, Cruella de Ville did for a very unusual coat: one fashioned from the black and white spotted coats of dogs. The film was "101 Dalmatians" (1961) and she was the enemy of Pongo, Perdita and thier puppies. Her dream was never fulfilled, though, thanks to all the 狗 in London, who, being alerted to the situation 由 the mysterious "Twilight Bark", freed the imprisoned 小狗 before they could be turned into 涂层, 外套 fur, something they wouldn't have liked!

7. Edgar-Knowing that Madame Bonfamille's wealth reverted to him if misfortune befell her cats, Edgar the butler plotted to get rid of the heirs apparent. He was the villain in "The Aristocats" in 1970. But with the help of O'Malley and his alley-cat gang, the plot was twisted around, and Edgar wound up in a 树干 bound for Timbuktoo.

8. Prince John and Sir Hiss-Walt 迪士尼 Productions' newest animated culprits make their debut in the feature-lengh cartoon "Robin Hood". A scrawny lion plays the part of Prince John, Richard the Lion-heart's treacherous brother who conspires to bring himself to power while the king is away. His assistant is Sir Hiss, who has 更多 intelligence than Prince John gives him credit for. The voices for the two characters are supplied 由 Peter Ustinov and Terry-Thomas and as anyone who has seen the movie will testify, they live up to the best evil traditions of Walt 迪士尼 villains.

9. Jafar-The Evil Vizer desires power over Agrabah and lusts over the Sultan's beautiful daughter, Princess Jasmine. He is the 秒 most powerful authority in Agrabah, answering only to the Sultan. He is always accompanied 由 his sarcastic, devious pet parrot, lago. Whilst presenting a charming and respectable exterior to the Sultan and the people of Agrabah, he secretly holds everyone around him in contempt and manipulates the Sultan 由 means of hypnotizing him with a magical snake-headed staff, which he always carries on his person. He has traveled widely and amassed a wide knowledge of magical artifacts and legends. Until he uses Genie's powers to become a sorcerer, however, his magical abilities are limited to the use of such artifacts as he has collected, and his prowess as an accomplished alchemist. Like some villain characters from other (including non-Disney) franchises, Jafar is attracted to a beautiful girl 或者 woman that is a protagonist. Here, he is attracted to Princess Jasmine, but primarily for her good looking body, and not for 茉莉, 茉莉花 herself as a person. His final wish was initially for 茉莉, 茉莉花 to fall desperately in 爱情 with him so he could make her his 皇后乐队 (he and Iago originally planned on killing her as soon as he became Sultan, but at some time later he refused to kill her, instead sparing her life); he first creates a golden crown for her from her shackles to do so with a wave of his hand, saying that a girl as beautiful as her "should be on the arm of the most powerful man in the world". Genie could not grant this wish, but after she spotted 阿拉丁 and Abu above Jafar and the Genie in a balcony, 茉莉, 茉莉花 got the idea to pretend to do so, and she and Jafar shared both their first 吻乐队（Kiss） together on the lips, in order for 茉莉, 茉莉花 to distract Jafar's attention from 阿拉丁 as he tried to get the lamp back. (Much earlier, though, he says in a sexist manner that Jasmine's speechlessness is "a fine quality in a wife"). Jafar transformed himself into a giant 眼镜蛇 to kill Aladdin, but just as he was about to eat him, 阿拉丁 tricked Jafar into using his third and final wish to become an all-powerful genie himself. In this form Jafar was red in hue, possibly to represent his 更多 "evil" nature, contrasting with Genie's blue tone. In Western culture, genies are almost always portrayed as being confined to small oil lamps until they are released to do a human's bidding; Jafar was therefore trapped 由 his own selfish wish for power. Screaming in rage he was sucked into a black oil lamp, dragging the protesting Iago with him. The Genie then flung the lamp into the Cave of Wonders for 10,000 years in "Aladdin" in 1992. 阿拉丁 is a classic 90's film now. After spending some time in the sunken Cave of Wonders, Jafar is freed from his lamp 由 one of 阿拉丁 enemies, Abis Mal. Because his genie form can't directly kill 阿拉丁 due to its inherent limitations, and since he can't actually travel outside of close proximity of the lamp, he attempts to arrange for Abis Mal to do it for him. He initially used his genie form to persuade Abis Mal into helping him, but then transforms into his human form after it became apparent that Abis Mal could not even respond coherently, much less agree to help him, out of intimidation at his terrifying genie form. Jafar forcibly recruited Abis Mal as his partner 由 forcing him to waste his first two wishes so that Abis Mal will assist him in his plot for revenge against 阿拉丁 in order to get his third wish (although Abis Mal, having earlier encountered Aladdin, tells him he would've assisted him anyway after learning this due to sharing a mutual desire for revenge against him as well).

Jafar reunites with Iago (who has freed himself from the lamp a few hours before Jafar, and also put him into the well after refusing to release him due to his simply using Iago and not thanking him) and demands him to lure 阿拉丁 and the Sultan into a trap. Iago successfully gets 阿拉丁 and Sultan to go for a flight on Carpet and while they're gone, Jafar invades the palace and begins to torment Genie and Abu. After the torture, he captures the two and begins the 下一个 part of his plan.

Aladdin, Sultan, Carpet and Iago reach the destination and what seems to be a peaceful and relaxing area, turns out to be a death trap as Sultan is kidnapped 由 hooded men on magic flying horses. 阿拉丁 threatens Iago saying he'll deal with him later and rushes off on Carpet to save the Sultan. 阿拉丁 fails and is thrown down a waterfall 由 Abis Mal but rescued 由 Jafar. Abis Mal's in shock but Jafar explains their act of revenge's not completed just yet. Jafar frames 阿拉丁 for the murder of the Sultan who's really being held in captivity 由 Jafar. Jafar disguises himself as 茉莉, 茉莉花 and right before Aladdin's executed via decapitation, Jafar reveals himself to torture 阿拉丁 even more. However unknown to him, Iago, consumed with guilt for helping Jafar set up his new friends, frees Genie who saves 阿拉丁 in the nick of time. At the palace, Jafar rewards Abis Mal with all of the treasure his 心 desired, with the only thing he requests in return is for Abis Mal to grant his freedom. Before he can, however, the lamp's taken 由 阿拉丁 who knows that the only way to destroy him is to destroy his lamp. Jafar transforms into a genie and battles the heroes, confident that they'll never destroy him because of his great power. He creates a wasteland in the palace's garden creating pits of lava as a trap for 阿拉丁 and knocks out Genie. When it seems like he is succeeding, Iago unexpectedly comes to the rescue. Jafar is furious at this betrayal and tries to attack him as well. He badly weakens his former ally, but with his last ounce of strength, Iago kicks the lamp into the lava which results in Jafar violently imploding into a 云, 云计算 of dust, destroying him. Peace is restored and Iago is welcomed into Aladdin's 首页 in "The Return of Jafar" in 1994. 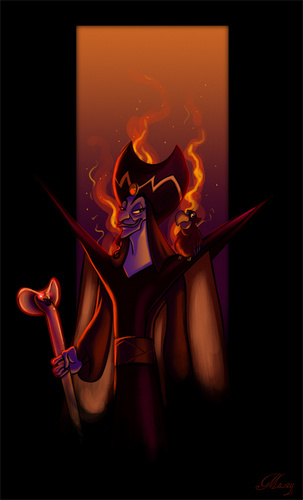 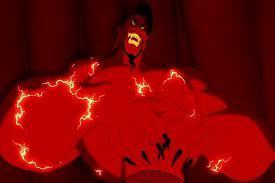 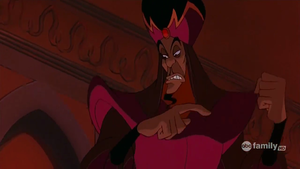 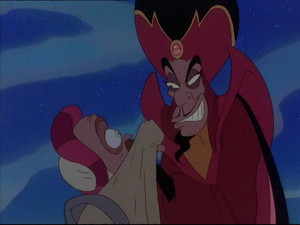 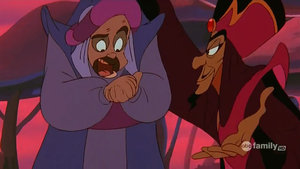 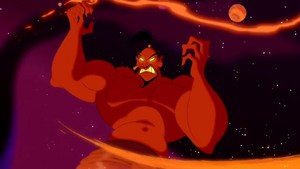 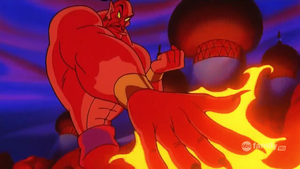 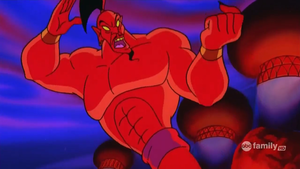 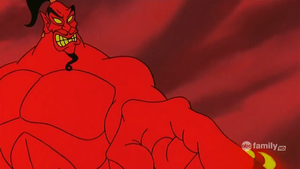 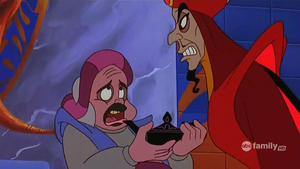 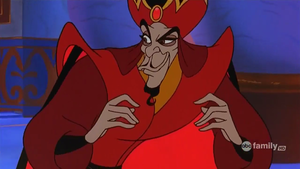 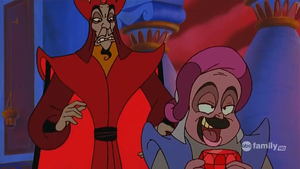 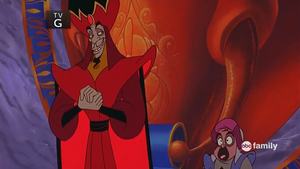 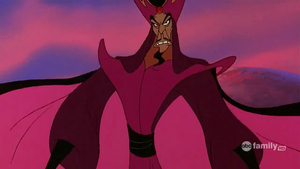