Zylice had a mother Mary who was a chef who worked in the local Inn. She had a father Johnathan a hard-working blacksmith-warrior who was an honoured Companion in Whiterun.

They lived in Falkreath a once nice, friendly
Town with animals and joy that is now a sad, warrior's graveyard...

Johnathan had to fight in the first ever 'Civil War' against the Thalmor and Stormcloaks. He died after the Stormcloaks and the Thalmor held him captive....He was then burried in Falkreath.

One day Zylice was abused of being 'the' hag who left her child abandoned in a shack and stole food. She was furious. The Stormcloaks hated her mother and wanted to kill her family! Zylice was arrested by the Stormcloaks and was on her Way to Hellgen......She hated the Stormcloaks and the Thalmor ever since.... She was going to get her revenge and fight in the third 'Civil War' and to become as powerful as the legendary 'Dragonborn' as her father once was!

2. She HATES Thalmor and Stormcloaks! (She calls Thalmor 'Falmer.')

6. Never buys common junk that she can find anywhere! She only buys rare/enchanted items (or spell tomes of course.)

7.Makes money by: stealing, working, selling, missions...any possible way! After all, shes too rich for merchants! They never have enough gold for her to sell expensive items to!

Zylice Is a young woman who wants to have a go at everything such as: striving to harness the power of all in magic, hunting, stealth, exploration, alchemy, all the gold in the world, to get what she wants when she wants it, helping all the people and to enjoy getting revenge and making the Stormcloaks and Thalmor suffer !!!!

She also has a lot of respect for an epic, power-mad woman. She helps people and has a few friends. Her best friend is Brelyna Maryon a Dark Elf who Is a kind, sweetheart and very helpful to Zylice. She has respect for:The guards, the townspeople, Whiterun, Solitude, Falkreath, Markarth, The 'Companions', the 'Theives Guild,' 'The College Of Winterhold,' plus she fought in the third 'Civil War.'

she's actually quite sensitive...she may call Aela a bi#c# under her breath (or anyone else) just because they speak in a certain way or won't steal/take an item they don't want. Zylice gets edgy with people with attitude or think they're superior to everyone else (*cough*....'Thalmor!')

Zylice often hunts
Her own food, collects
Her own ingredients, makes her own potions, chops her own wood, makes/improves/enchants her own armour, weapons, jewellery, mines her own
Ore/jewels, makes her own leather/strips etc. Even though she picks up the occasional 'above' components if she finds them lying about....

She also has a habit of drinking/eating/ weak potions/drinks/ food found to give her a boost! She doesn't waste
A nice wine/ale/or mead!

Zylice is wary of vampires. She Always hides or kills them from a distance in case she gets the dreaded 'Vampirism Curse!'

Food Zylice doesn't like is: Gourd, Charred Skeever Hide or some meats such as: Vension, raw stuff, and any sort of land-animal meat. She likes chicken/ pheasant, rabbit and fish though!

She HATES weak everything, heavy armour and heavy weapons!

Cynder is a shy, gothic type of strider-mage. Her mother ,Elowyn was a vampire-assasin and former leader of the 'Dark Brotherhood.'

Her mother was transformed into the 'Night Mother' when she tried to use the most powerful, out of control sorcery magic. She eventually died of sickness and loss of power.

Cynder has a dark background, but she loves sneaking about, creating powerful potions, enchantments , stealing and casting spells.

Cynder has nothing to do with the 'Civil War.' She doesn't like: Aragons, meat (exept for pheasant and chicken),

Cynder plans to: Join The Dark Brotherhood where her mum is the 'Night Mother,' Join the 'Theives Guild', Join 'The College of Winterhold,' become a great enchanter, alchemist, Mage and stealthy!

Cynder is a mysterious, gothic, sneaky and shy character.

一年多以前 Shaeris said…
Name: Kyraniel (a name I created myself from the name Kira, which means dark, and the Sindolin suffix -niel meaning daughter. The name together means 'daughter of darkness'. It is pronounced kee-rah-nee-el.)

Appearance: Like most Altmer, Kyraniel has a yellowish skin tone and red-orange eyes. What differs from other Altmer though is her haircolor, which is a dark brown, almost black. She wears no war paint. In beast form she looks much like other werewolves.

Background Story: Kyraniel's mother died at her birth, and she never knew her father, who was rumored to be the Dread Lord Sithis himself. She was cared for by one of her mother's servants until he died, then she was left to fend for herself, wandering Somerset Isle.

She travelled to Elsweyr, where she joined the Dark Brotherhood and quickly ascended to be their leader. This was where she first learned of her ability to 'listen' to the Night Mother. When the Sanctuary in Elsweyr was destroyed, only Kyraniel escaped with her life.

Kyraniel fled to Skyrim, where she took leadership of the Skyrim Dark Brotherhood and led them to glory. It was there she met Cicero, the insane little jester who became her best friend and companion.

Personality: Kyraniel did not gain much from her mother other than a very calm, mysterious aura and monotone voice, but from Sithis came her crazed bloodlust and need for death.

Alana is a hoarder... and kleptomaniac. She is fairly friendly and easy-going, with a slight sarcastic edge, and generally has good relationships with the people of Skyrim. She likes this, because it means people allow her to take their things without considering it stealing. Unknown to the merchants and other residents of Skyrim, Alana is an expert pickpocket!

As you've probably guessed by now, she is a valued member of the Thieves' Guild and is very devoted to them. They taught her the basics, and for that she is very thankful. Despite having a habit of doing some illegal things, Alana is against unjust murder and wants the Dark Brotherhood destroyed.

Alana is many things. She favours light armour and heavy two-handed weapons. She is an avid musician and singer, who travels the lands and performs to locals. She is also a bit of a bookworm, and loves to collect all the books she can find and add them to her library at home.

For reasons unknown, Alana loves to collect Nirnroot and never use it in potions; she just stores it. She does, however, use up her other alchemy ingredients pretty quickly. Before moving into Lakeview Manor, Alana lived in a little shack just north of the house, after its previous owner was mysteriously killed.

Alana's best friend is Kharjo. She has two pets; a small, fluffy bunny with surprising combat ability (mod), and a horse that she bought from Markarth. She has become more than friendly with Derkeethus and may soon marry him.

While Alana is easy to get along with for the most part, she did get off on the wrong foot with the vampires, and they are now her sworn enemies. However, the dispute has allowed her to become acquainted with the Dawnguard.

Alana is currently focusing on her pickpocketing skill more than anything, and she aspires to someday be able to steal people's weapons and even the clothes they are wearing, without them even noticing. Partly so that she can either hoard or sell them, but mostly (and more importantly) to prank them. 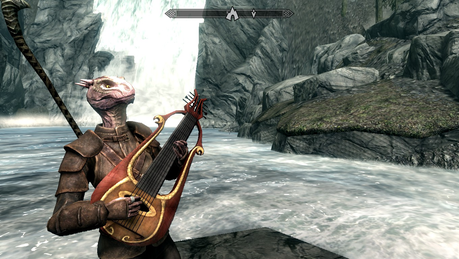