1
Dopple Crossed chapter 16 part 6
posted by HaleyDewit
Rachel looked around her before she pressed the 钟, 贝尔 of Ric’s loft.
“Rachel” Stefan 说 a little surprised, when he opened the door. “Come in”
“Are 你 alone?” Rachel checked. Stefan nodded and she followed him inside. “I need to know something” she cut to the chase. “How do 你 know I’m a werewolf?”
“It’s a full moon tonight and 你 were 表演 strange earlier” Stefan explained. “Plus I’m a vampire, I have learned to recognize them, even if they’re in human shape”
“Veronica will kill me if she finds out I’ve been talking to you” Rachel 说 scared now. Stefan took her shoulders.
“She is not your concern” he 说 sharp. “If she thinks she can gather an army and try to exterminate us, well, we can do exactly the same. Rachel, listen to me. This isn’t about blood family. This is about sticking to your kind. If it has ever been important to choose a side, it’s now”
Rachel wanted to say something back, when someone ran the 钟, 贝尔 and banged the door. Whoever was outside, was very impatient.
“Hold that thought” Stefan 说 as he raced to the door to open it and see sheriff Forbes enter, with her gun aimed at Rachel. “Liz, what’s going on?” he asked careful.
Liz walked towards Rachel and cuffed her.
“Hey, what are 你 doing?” Rachel asked upset.
“I’m arresting 你 for the murder of Gerard Lindy” Liz explained angry.
“Liz, 你 don’t know what you’re doing” Stefan 说 agitated.
“Stay out of it, Stefan” Liz snapped as she pulled Rachel along.
RedHood591 likes this

19
holding hands!
added by star2894
11
Why Damon and Elena Are Better Than Stefan and Elena
posted by DelenaNianlover
I'm new here and I just wanted to share my 查看 on why Damon and Elena NEED to be together. I wrote this for a friend to persuade her to 加入 Delena, and this speech worked. I hope 你 like it.


​ Okay, so my speech consists of many parts. My first part is how they first met. Damon was just lying in the road, looking for his 下一个 meal, when Elena comes and talks and he hears her voice. He goes up to and say “Katherine?”  “No, I’m Elena.” She replies. With that it takes him three 秒 to find out that Elena is indeed Elena and not Katherine. (Even though he probably could have...
continue reading...
5
Breaking Point- Part 1
posted by Delenafan2

I know we're all feeling the absence of TVD until it returns this fall so here is some 粉丝 fiction I had wrote a little while ago. I have it 发布 also on a 粉丝 Fiction website. I hope 你 all enjoy it.
WARNING: Adult content in some of the later chapters.

Chapter 1
It was quiet in his room after Elena had left him. He had hoped she would’ve 给 him a reaction, any reaction, even a smile, something, after he had told her he’d always choose her. Obviously, he didn’t expect an outpouring of love, but even a small hug 或者 a 吻乐队（Kiss） on the cheek would’ve been better than a...
continue reading...
56
50 reasons why Damon&Elena belong together.
posted by chairbuck12
Was made on the CW Lounge before it was taking over 由 Bamon fans!
----

1. Elena brings out Damon's humanity
2. Elena is the ONLY female main character who hasn't been bitten 由 Damon yet.
3. In the 秒 episode, Damon says that he can clearly see why Stefan is so smitten with Elena....because of course, Damon is smitten with Elena himself.
4. Damon needs someone sweet like Elena in his life to heal his broken heart.
5. Damon kisses Elena's hand when she goes to leave.
6. Elena saves Damon, and is clearly scared for him.
7. Damon is so gentle towards Elena, especially in the episode when he strokes...
continue reading...
13
Elena and Damon 淋浴 Scene
posted by Delenafan2

“Damon?” she 说 before entering his room. She heard water running in the bathroom. Was he in the shower? She grimaced hoping to not find him in there with Andie. Her curiosity eating away...
continue reading...
37
Everyone Loves Delena...Except Julie Plec & Harper/Alloy. But Why?
posted by delenasalvatore

I don't mean to sound boastful 或者 smug, but if the numbers on 潮流粉丝俱乐部 are anything...
continue reading... 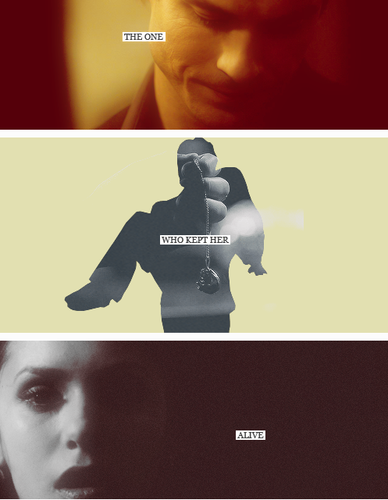 7
The One Who Kept Her Alive
added by nian13 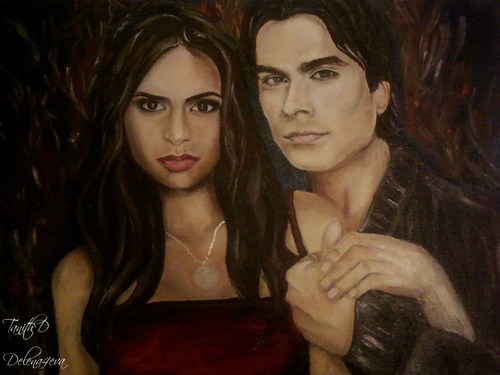 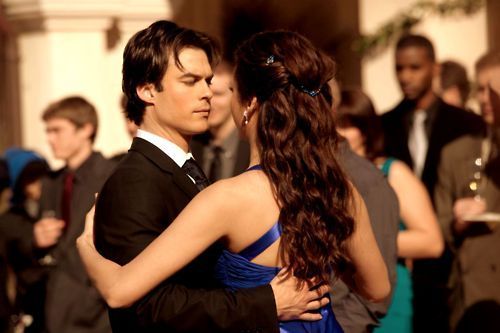 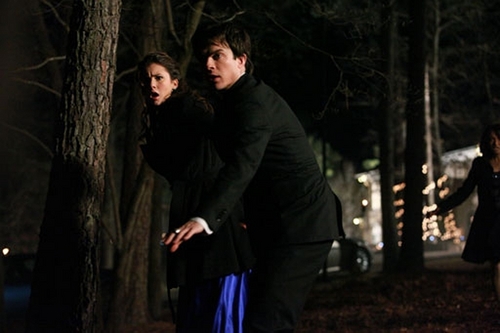 9
TVD - Episodes Stills
added by _Chryso_
3
Why Elena deserves Damon, Why Damon deserves Elena
posted by delenafan123
Ok everybody this is my first 文章 and I am not very good at this but I am giving it a try. OK I have watched from the very beginning every Elena and Damon scene from seasons 1-3. I have researched and watched every 移动 that they make and how they look towards eachother.I am going to start on why Elena deserves to be with Damon.
From the beginning we see that when Bonnie touches Elena, she sees a black crow. The 乌鸦 symbolizes Damon. When she met Damon in 1x02 she instantly had a connection with him from the moment she looked at him. She felt like something was there. Damon makes her believe...
continue reading...
7
The differences between Delena and Stelena(or why I prefer DE)
posted by RoseJackDawson
Differences between Delena and Stelena.
First of all I need 你 to know that no matter what 你 read down here and how 你 see it,I'm multishiper and I ship both-Delena and Stelena. But when people say that they 爱情 both couples the same,they don't really want to admit that it's impossible. 你 just can't feel the same for two absolutely different things,it's not natural,so...here's my choice. It thought it wouldn't be easy,but when I put it all like this it turned out to be easiest decision I ever had to make. One 更多 thing,I decided which couple is my first and which one I 爱情 the most,but...
continue reading...
13
“Saint” Stefan is the most selfish and hypocrite character on TVD [P1]
posted by bdavis98
Fair warring this 文章 states FATCS that are REAL but people make excuse for it 或者 simply deny it, this the real Stefan Salvatore so brace yourselves.

So from S1 until S3 the writers and the 粉丝 have portrayed/ seen Stefan as the “good” brother as the “saint” the selfless brother and all that crap. But if 你 really open your eyes for one 秒 of this picture perfect 你 will see the truth. That Stefan from 日 one LIED and kept secrets, hides his past and made his brother out to be the “big bad wolf” and him as the scared little boy who has done nothing wrong.

But facts proves...
continue reading...
8
Damon/Katherine Sex Scene? No big deal.
posted by danibat1
So, the rumor mill is starting up about a supposed Damon/Katherine sex scene, and 99% of DE 粉丝 are FRAKIN OUT.
But personally, even if there is one, it's not going to be a big deal. Why 你 ask? Well, let's look at the facts.
There is the possibility that this scene would be a flashback, therefore-no need to worry there.

Then there is the possibility that it is in the present. Now, if 你 remember back in 3x05 when Damon and Katherine made out, Damon says, "You just don't do it for me anymore." and I really don't think the writers were just trying to throw us DE 粉丝 a bone here- I think that...
continue reading...
13
ELENA & DAMON HATERS: WHY 你 CAN'T HATE THEM THIS SEASON.
posted by WonderlandKills
This 文章 may come across as pointless ranting, but it must be said. It's come to my attention that people are hating on Damon and Elena again for there actions. So I've decided to try and sum things up.
Elena: She is not a slut, haters. I know that SE 粉丝 are getting pissed, but techinally, she hasn't done anything yet towards Damon, she is fighting, she doesn't want to be know as that girl. "If I did, then what would that make me?" - 3x04. I hope people understand that throughout the half of the third season so far, she has been fighting, she was still hoping for Stefan, she didn't give...
continue reading...
More Cards
1234567891011