17
Saint Stefan we worship you, kill, cut of people's head we still think of 你 as a saint
posted by bdavis98

First things first DO NOT BASH, read the whole 文章 first then 评论 your opinion but please try as much as 你 can to respect others opinions

To clear things I hate Stefan but I 'I'll do try my best to be subjective ok, to start things off I'm 写作 this 文章 because how Caroline was bashing Damon in last night episode (3x04) I mean did she have loss her memories 或者 something did she forget that he almost died because he saved her life and her werewolf boyfriend , and before all of he saved her life did she forget that he saved Elena's life 更多 than once that he made plans and took risks on his own life 更多 than once and DIDN'T KILL HER MOTHER which he easily could have done with a blink of an eye, did she forget that helped all of them (Stefan, Caroline, Jeremy ,Alaric…) to protect Elena in any way possible (like in 2x11 he made bonnie put a 墙 in the house so Elena wouldn't get out and try to go in the cave so she can save Stefan) where was she when he did that (ok Elijah came in anyway but he was trying to keep her safe) because she wasn't there and she didn't think of doing that Damon came up with that all 由 himself, he also saved her life with Stefan from the 狼人 that kidnapped her, don't forget that he saved her life in (2x01) she was really in danger if he hadn't feed her his blood she might have died he saved her it's not his fault that Katherine killed her, I almost forgot he and Stefan saved her from Logan he almost kidnapped her, if it wasn't for him who knows what Logan would have done to her

A side from saving her life 4 times he also saved bonnie her other BFF from the strongest vampire ever. He helped Elena all summer looking for his brother that she's in 爱情 with while he is in 爱情 with and didn't make one 移动 on her, he protected her from the awful truth about how they were all Stefan's victims not Klaus's, he 迷失 a friend because he keeping Elena safe. And after ALL OF THAT he's still the "bad brother" to quote Caroline really he's the bad brother, he's still the person with bad behavior really?? I'm not saying he didn't make mistakes along the way but he never betrayed them any of them he never lied to them about who he is, he never hidden a part of himself. What makes really anger is that she knows all of this and she knows what Stefan did (laying, hiding who is as a riper, the fact he's the one who turned Damon, steeling Katherine from him and don't tell me didn't Katherine might have asked Stefan to dance but Stefan knew how Damon felt about her) she know all of that and yet somehow Stefan is the "good brother" and Damon is the "bad brother". I'm not saying Stefan is all bad of course not but he also made mistakes along the way, he's not a saint but she still think that Stefan is good and Damon is bad and from the she was talking about him she doesn't want Elena to be involved with in any way.

What really pissed this episode is how Alaric was treating Damon, "what are 你 doing here" in the morning when Damon was with Elena cooking it was like he was throwing him out like as if he was something that 交叉, 十字架 the line they were only cooking for god sakes. He treated him like an earn boy it felt like "hey, Elena is 安全 now she doesn't need saving this mint so go do something I will call 你 if/when she needs to be saved" I know he didn't say that but it felt like that and his excuse is because now he's taking care of her and her brother um…. If 你 really want to take care for her don't let her run around all over the place risking her life trying to get her boyfriend back, he's worried that Damon might put her in danger, Damon the guy who has saved her life on multiple occasions while risking his life with every time, Damon who keep it her out of the loop when he was looking for Stefan because he wanted to keep 安全 from Klaus, Damon who's been in 爱情 with her for 2 years now and who kept his decentness and didn't act on his feelings so she wouldn't be stuck in the middle between him and Stefan. Now to the reason of my title, I put that 标题 because both brothers have good and bad in them both have made mistakes but somehow all the people in MF still think/expect the worst of Damon and the think/expect the best of Stefan. 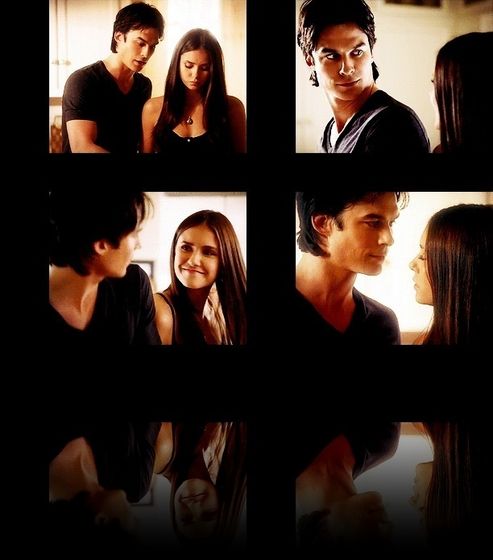 Aquarius and Temperament:
Aquarius tend to be rebels just for the sake of having their own way. Their stubbornness sometimes causes their failure, they will continue...
continue reading...
56
50 reasons why Damon&Elena belong together.
posted by chairbuck12
Was made on the CW Lounge before it was taking over 由 Bamon fans!
----

In the blink of an eye he was up on his feet, he was perfectly fine. I felt the 墙 against my back, I had no where else to go. Surprisingly he didn't...
continue reading...
36
In The Books: Evidence That Damon Is In 爱情 With Elena and Only Elena
posted by LotusWhispers

***Bear in mind, there are way 更多 语录 than this proving it, but these are the main ones!***

Because Stefan thinks so:

"You should keep using it, Stefan 说 voicelessly. Your influence over him is strongest."
- Stefan to Elena, about Damon. Midnight.

"Of one thing I am certain: he would never harm you. He loves you. How can he help it?"
- Stefan, on Damon, in a letter to Elena. Nightfall.

“You can pretend 你 don’t care. 你 can fool the whole world. But I know differently."
- Stefan, about Damon missing Elena. Dark Reunion.

8
look at this!!!
added by jensen_ian06
Source: tumblr.com